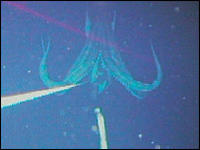 In the world of science, things are moving forward according to my master plan. These scientists in Japan have taken the first photos ever of a live adult giant squid.

The first image that pops into my head is this huge calamari steak, grilled up with a bit of garlic. That would rock.

Apparently, this camera they used was like a giant fishing lure with big hooks. The squid, as long as a bus, ripped his own tentacle of to get loose. The tentacle was still flopping around when they pulled it up.

"The grip wasn't as strong as I expected; it felt sticky," he explained.

No kidding! You ripped his arm off! I’d imagine that would hamper the strength of anyone’s grip.

Now, I’m getting this image of a cursed family. Descendents of the scientist who will be forever haunted by a ghostly giant squid, who flops next to them as they lie in their beds, moaning in a squishy voice “yoooo tooook myyy arrrrrmmmmm…” Real Saturday afternoon creature feature stuff.

But seriously, I like the idea of farming these guys for steaks. I mean the squids. Not the scientists. link

In other science news that goes along with my master plan, scientists in England were able to extract spider blood from a 20 million year old fossilized spider.

The droplets are the first identified examples of spider blood ever found in an amber fossil. It is possible the blood could be used to extract DNA.

If that won't produce dinosaurs, at least we can get some dinosaur spiders… link
Posted by alpharat at 1:48 PM