Day One is Done, and the repairs have already started

I think I may have stumbled upon the one job that is recession-proof, and indeed may be quite the opposite.

Working in the unemployment office.

As Michigan’s unemployment rate rises to the double digits and continues to climb, it seems that our unemployment offices don’t have the staff or resources to accommodate all the people trying to get their benefits, and they are beefing up there.

I wonder how many people are trying to get into those jobs?

I truly feel sorry for Mr. Obama, because he has truly inherited a rundown amusement park. I watched the inauguration (as we all did), got excited, got hopeful, and then when it was over, got realistic. Now it’s time to get back to work.

No matter what you think of the guy (and I think very highly of him), he’s probably not a superhero or a miracle worker, and fixing this mess is going to take a lot of sweat and hard work from him, his staff and the rest of us.

If I only knew what to do, I’d start working on it right now.

In the first few days of his administration, though, I think he has already started to prove whose side he’s on - ours. On day one, the new president sent out a memo to all federal agencies telling them to commit to an era of open government. This means they need to start following the Freedom of Information Act (FOIA). 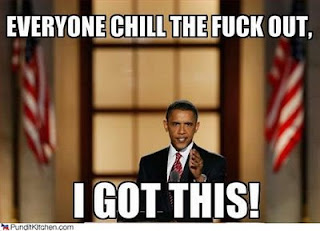 This overturns one of the actions of our internal axis of evil, John Ashcroft, who, in the wake of the big nine-one-one, ordered all government agencies to disclose information only after they looked for every possible reason to not disclose it, essentially shutting down the FOIA.

Obama’s administration is already looking friendlier to the public, and a transparent government is a government that (in a democracy) is one that is held to a high standard and an obligation to protect the interests of its citizens. It gives me hope in that sense. (Link to more)

Obama also ordered a suspension of a ton of 11th-hour regulatory changes that the Bush administration pushed through in its last days – with good reason (He didn’t have our best interests in mind throughout his presidency, why would he start at the end?). Among those was an order to remove wolves from the endangered species list in Michigan. Hopefully, scrutiny of that order puts them back on the list, because, let me tell you, we don’t really have a thriving wolf population here. Coyotes, yes, but that’s a whole different story.

So, yeah, I am hopeful based on what he’s already done, and I’m ready to do what I can to do my share. Who knows what it will be, but I’m realistic in the knowledge that state of affairs for the past eight years have left us needing a bit more than a fresh coat of paint.
Posted by alpharat at 9:22 AM

Your annual breast gig is the icing on the cake of all the pro-social, pro-people, pro-animal pro-etc. things you do.

Ten bucks says a friend who needs a sofa to surf for longer than a weekend while we sort this mess out isn't gonna be turned away by you, either.

You've been doing it, Alpharat.

Anyone can do more, sure, but don't think you haven't been doing plenty all along.

By the way, did I tell you about the street performer we saw in Vegas?

A bunch of us were standing around watching him do his thing. It was amazing, what this kid was doing, but that's not the point. The point is, when he finished, we all felt amazed.

I had a pocket full of chump-change, but I grabbed MrZ's wallet out of his front pocket instead, and stole a fiver for the kid's five gallon pickle jar.

Of all the people in this throng of at least thirty who were mostly well-heeled, the only other to drop any coin in the kid's pickle jar was an apparently poor guy. He pulled a box of Camels and two bucks out of his pocket, and gave a dollar to the street performer.

That sort of thing makes me cry.


And Michigan really needs her wolves. Ask the deer herd. They'd rather feed a wolf than starve.

Can you believe I came all the way back here from the 7-11 to make sure I spelled "well-heeled" correctly?

Because, you know, those who are well healed, are those who don't show much scarring from having been beaten to a bloody pulp by me.